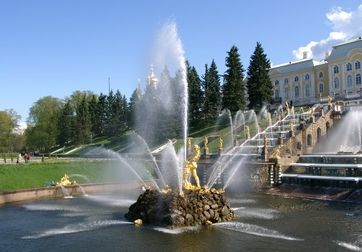 It is a jewel of the Russian art, a town of parks, palaces and fountains. It was built by the order of Peter the Great to commemorate the victory of Russia over Swedish troops in the Northern War.

The center of the ensemble is the Grand Palace with the brilliant interiors, which were badly damaged during the time of the Second World War. The restoration works were made after the photos and descriptions of the palace of the beginning of the XX century. From the Grand Palace three monumental cascading fountains lead to the Lower Park, the real masterpiece in itself with 173 fountains of different kinds on its grounds.