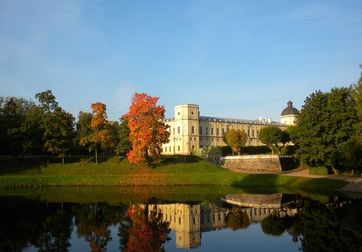 The Gatchina Palace and Park ensemble is located 45 kilometers southwest of St.Petersburg being the most faraway estate of all suburbs. In 1712-1717 the Gatchina farm was owned by Peter the Great's sister, Natalie. After her death the owners changed several times till Catherine II acquired the estate and gave it to Count Orlov, her favorite.

In 1783 Catherine II bought the estate from the Orlovs and gave it to her son, crown prince Paul. From 1792 minor innovations were followed by extensive works in the Palace and the Park. The architect V. Brenna implemented the ideas of Paul. According to his designs the interiors of the Palace were rearranged and decorated. This architect also developed the designs for the Ekaterinverdersky Tower, the Forest Green-house, the Ensemble of the Monument Gates, the Jetty Terrace and the layout of the gardens. Brenna was the author of the Balcony Terrace, as well as the Square with Bastions and the Connstable Obelisk near the Park. The Birch-tree House was built to the drawing of A.Viogle. The drawings of N.Lvov were used to create the Amphitheater. In 1792 - 1800 V. Brenna and the landscape gardener D.Hext laid out the Sylvia Park between the Palace Park and the Menagerie.